The Beresford School District, Watchdog Foundation, Beresford Area Arts, and Beresford Athletic Booster Club are proud to announce the 1977 Girls’ Basketball Team  for induction into our Watchdog Hall of Fame. During the fall of 1977, Coach Evenson guided his Watchdogs to a 3rd place finish at the 1977 State “B” Tourney in Huron and a 20-5 record.  It was the first-ever trip to the State “B” Tourney for the Watchdogs and only the third year that BHS had a girls’ basketball team.  The Watchdogs were District Champions for the third straight year and they won the Region for the first time in school history.  In the Region, they had an exciting one-point win over Irene, avenging a previous loss during the season, and then had a three-point win, over a highly ranked team from Freeman Public.  At the State “B” Tourney in Huron, the Watchdogs beat Ipswich in the first round (36-29), then lost to Clear Lake (37-51), and then beat New Underwood (43-33) to finish third at State.  Join us Saturday, September 17, 2022, to learn more about the trailblazing 1977 Girls’ Basketball Team’s journey into the Watchdog Hall of Fame. The 1977 Girls’ Basketball Team will be inducted under the Athletics pillar. Team members and coaches include Ed Evenson (head coach), Cathy Olson (assistant coach), Players: Ann Dolan, Leslie Dolan, Sheila Nelson, Marla Klostergaard, Sharon Twite, Linda Farley, Glenda Carnes, Janet Ambur, Karla Rick, Manager Tracie Hofer, Manager Ruth Kennedy, Natalie Larson, Shelly Kennedy, and Sharon Stuessi.

Please save the date for our fifth Watchdog Hall of Fame induction ceremony. Our Hall of Fame event will take place on Saturday, September 17, 2022, at the Bridges of Beresford. The ceremony is open to the public and will begin at 7:00 p.m. Before the ceremony, consider joining us for a catered meal at 6:00 p.m. If you are interested in attending the banquet, please contact Dustin Degen by email (dustin.degen@k12.sd.us), phone (605-763-4293), or mail (301 West Maple Street, Beresford, SD 57004) for ticket prices and availability. Stay tuned for additional updates and biographical information regarding our inductees and the upcoming Watchdog Hall of Fame event. 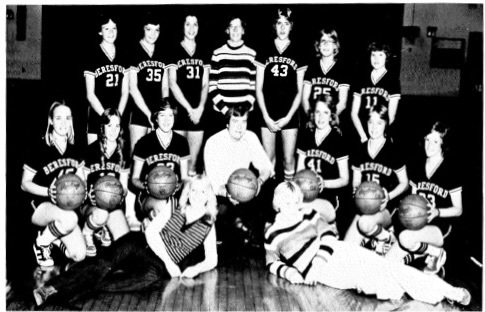