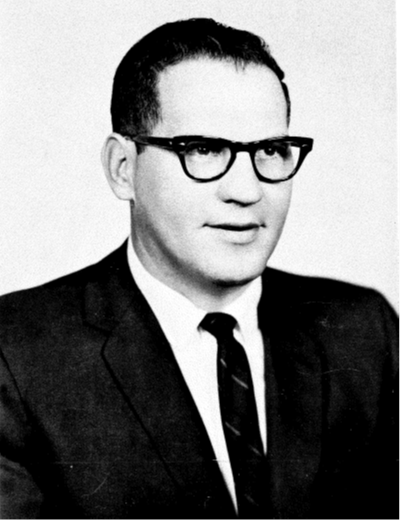 Roger Webb Price was born on September 3, 1926 in Spirit Lake, Iowa, the youngest of four children of Lloyd and Eva Webb Price.  Though he always considered himself of humble origins, both sides of his family had deep American roots.  They could count six ancestors who came to America in 1620 aboard the Mayflower, one of whom had previously spent five years at Jamestown, Virginia.  He had Dutch ancestors who were farming in New Amsterdam before it was called New York City.  His lineage included several Revolutionary War patriots as well as William Crockett, older brother of the celebrated frontiersman, Davy Crockett.  On the title page of a copy of Davy Crockett’s autobiography that Roger gave to his son, he had underlined Davy’s motto:  “I leave this rule for others when I’m dead.  Be always sure you’re right – then go ahead.”

Roger was a child of the Great Depression and WWII.  His father was a bookkeeper and bank cashier who lost his job when the bank closed soon after the Depression began.  He would remain underemployed until 1941 when he found work in Santa Monica, California at the Douglas Aircraft Plant.  Unfortunately this meant that he was mostly absent during Roger’s high school years.

Roger’s mother was a teacher.  During the Depression, she worked hard to support the family by teaching at a small country school.  Roger learned from her that while you won’t get rich being a teacher it is nevertheless a good and honorable profession that can have a positive influence not just on individuals but on an entire community.

Roger also had the good fortune of having a great mentor, an uncle, John Webb, who taught and coached at Spirit Lake High School for over 40 years.  John was already a local legend by that time and eventually he would become one of only a few coaches inducted into the Iowa state athletic halls of fame in all three sports that he coached:  football, basketball and track.  He not only implanted in Roger a love for sports but also the idea that coaching should be about much more than win-loss records.  He believed that a coach first needed to instill a winning spirit in his players by treating them like winners and encouraging them to believe in themselves.  Then he would teach them how they could be the best they can be through hard work, discipline and teamwork.

Not surprisingly then, coming out of high school Roger had a deep ambition to be a teacher and coach.  World War II, however, would delay those ambitions.  In 1944, just weeks after graduating from high school, Mr. Price enlisted in the US Navy Air Corps.  He served for two years and was honorably discharged in June of 1946.  That autumn he enrolled at Sioux Falls College where he studied to be a teacher and coach and played on the Braves’ football team.  While at Sioux Falls College, he met a beautiful cheerleader by the name of Dolores Kremer who was also studying to be a teacher.  She would become his wife in 1948.  Together they would have three children, Barry, Debra and Lisa.

In 1950, Mr. Price graduated from Sioux Falls College with a Bachelor of Science degree.  He spent his first year after college as a school counselor in the Sioux Falls school system but he had a deep desire to coach so in the fall of 1951 he accepted a job at Custer, SD to be a teacher and coach.  He remained there until 1955 when he accepted a position in the Beresford public school system where he would be head football coach, teach biology, business math and driver education as well as coach JV basketball.  Beresford appealed to him not just because of its record of excellence but also because it allowed him to be closer to his recently widowed mother and because it would allow him to complete work on a Master’s degree at the nearby University of South Dakota.

From 1955 through 1957, Mr. Price coached the Watchdog football teams to some memorable heights, including an undefeated season in 1956.  He would always give his athletes the credit for their successes and he did have some great players on those teams, including Watchdog Hall of Fame members Joe Thorne and Bob Young.

Mr. Price completed his Master’s degree in School Administration during the summer of 1957.  Also in 1957, he was hired to be the high school principal.  When longtime superintendent, Milton Shennum, retired at the end of the 1958 spring term Mr. Price was hired to be the school superintendent, the position he held until his sudden death.  A superintendent, with the guidance of the Board, is responsible for making many important decisions for the school system.  Sometimes they may not be popular but Mr. Price had a supportive board and a great faculty and staff that made his job easier and the school system a great one.  People like Royal Sweeley, Grace Kennedy, Milo Winter, Katherine Johnson, Eldred Chicoine, Bertha Nebelsieck, Harold Pruitt, Violet Jacobs, Clark Baird, Wayne Haensel, Mina Smith, George Ryan, Mary Corey, Fred Guindon, Mike Bak, Louis VanderLaan, and Anita Girard, just to name a few, shared in the success.  Throughout his career, Mr. Price was also a member of the following committees:  the National Committee on Education, the National School Administration Board, the Sectional Basketball Committee, and the Section Track and Field Committee.

Mr. Price knew that community support was vital for the success of any school system.  A successful sports program was just one way to help develop and maintain that support.  He believed that great music and speech programs were equally important.  He made a special effort to stay in touch with the local community and made many friends and acquaintances along the way.  During the summer, under the guise of putting together the bus routes for the upcoming year, he would try to call upon as many of the rural families as he could.  In addition to the school-related organizations, Mr. Price also belonged to the Beresford Lions Club, the American Legion, the Beresford Masonic Lodge, the Beresford Golf Club and he was a member of the Beresford Congregational United Church of Christ.

Mr. Price passed away suddenly and unexpectedly in December, 1963.  The 1964 BHS Annual memorialized him thusly:  “The years by themselves do not make a place historic.  It is men who give the color of history to a place by their deeds there or by merely having lived there.”—Simeon Strunsky.  In like manner, it is not the passing of time but the people who give color to Beresford High School.  Each person adds to the history of our school, with his deeds or merely his presence.  During the course of this past school year, Beresford High School lost the presence of just one of these people—Mr. Roger Price, who as a distinguished, honored, and respected administrator will be remembered for his interest and enthusiasm in all aspects of school life.”

Congratulations to the family of Mr. Roger Price, our Watchdog Hall of Fame Distinguished Service inductee!