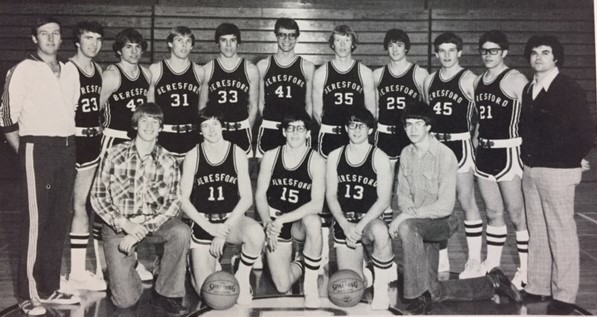 The 1978-79 Watchdog Boys Basketball Team had an outstanding season under Head Coach Jim Sorensen and Assistant Coach Jim Babb, compiling a record of 24-2.  Their team captain, chosen by the players, was David Mohr.

The Watchdog Basketball team was fortunate to have a 12-man team where everyone worked for one another.  Whether it was in practice or during a game, every member contributed a great amount to the success of the team.

The Watchdogs took a great deal of pride in their defense, holding their opponents to an average of 44.2 points per game.  The only teams that got beyond 50 in the regular season were Canton and Alcester.

The games that kept fans standing throughout were with Alcester, where Kirk Knight made the final basket to win the game and with Armour in the State Championship where the Watchdogs lost in overtime.  The Beresford-Armour game is one of the most famous state championship games in South Dakota sports history.  In fact, the Sioux Falls Argus Leader and SDHS Hoops selected it as the greatest basketball game ever in South Dakota.