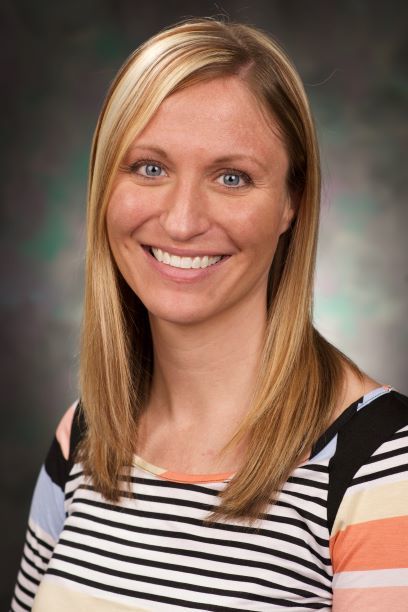 Natalie was a four-year letter winner and three-year starter for the Watchdog Volleyball Team.

Natalie was a four-year letter winner and a three-year starter for the Watchdog Girls Basketball Team.  She was the center/forward on her basketball team and helped lead the Watchdogs to Big Sioux Conference Championships in 2003 and 2004, a District title in 2003, a Region title in 2003, and 3rd place finish at the State “A” Tourney in 2003.

Natalie is the Beresford High School record holder for:  career points, career rebounds, career steals, most points in one game, most points in a season, and best field goal percentage in a season.  She was named to the South Dakota All-Decade (1996-2005) First Team.

Other Honors as a BHS Senior

Natalie was named to the Girls and Women in Sports “Elite 15” senior females athletes in the state of South Dakota and received their Sports Leadership Award.  She was the state winner in the “Wendy’s High School Heisman” Award program in 2005.  Natalie was selected as the female winner out of a pool of 115 nominated seniors in South Dakota.  She was selected for the Heisman Award based on her excellent achievement in academics, athletics, and community service.

After high school, Natalie played basketball as a freshman at South Dakota State University.  At SDSU, she earned the Newcomer of the Week Award.  She then transferred to the University of South Dakota and played basketball for the Coyotes.  During her time at USD, the Coyote women won several North Central Conference Championships and in 2008, the Coyotes won the North Central Region title and were the NCAA Division II National Runner-up.

The 2007-08 South Dakota women's basketball team enjoyed a season of historic proportions.  The Coyotes finished 33-2 and advanced to the Division II National Championship game before falling to Northern Kentucky in the finals. South Dakota finished the season ranked No. 2 in the USA Today/Division II Coaches Poll, the highest ranking in school history.  South Dakota won the North Central Conference with a 12-0 record and set a school record with a 31-game winning streak.  The Coyotes captured the North Central Region title for the first time ever and earned a berth in the national championship game with two thrilling wins in the quarterfinals and semifinals.

The 2007-08 Coyotes Women’s Basketball Team was inducted into the Coyote Sports Hall of Fame in 2011.

Natalie graduated from USD with a Nursing degree in 2009.  Natalie is now a professor at USD teaching nursing classes to undergraduates.  Natalie and her husband Casey live in Beresford and have a baby daughter named Bria.

Congratulations to our Watchdog Hall of Fame Athletics inductee, Mrs. Natalie (Carda) Board.