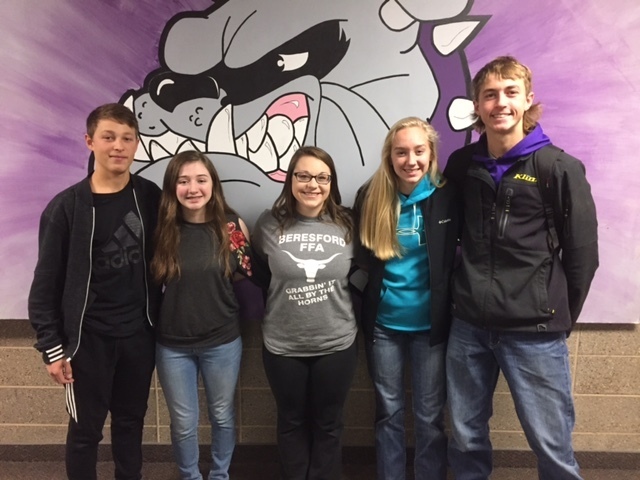 Everyday heroes. We seem to hear that term frequently, but how often does that term hit close to home?

On November 12, members of the FFA Chapter attended the District CDE competition in Parker. The teams and individuals had been working hard for that night, hoping to advance onto the State competition.

Riley Johnson, Cadence Stewart, Kamrynn Sveeggen, Conner Thaler, Rebecca Tiedeman, Rachel Watkins and Hayden Wilson had a little down time, so they decided to meander downtown to grab something to eat. While on their walk they noticed the front of an apartment building was on fire. Without hesitation, the students rushed into the building to evacuate the residents. Now, some of the residents were a little leery of high school students in FFA official dress telling them the building is on fire and they need to leave immediately. By being able to stay calm and collective, they were able to keep the fire at bay and make sure everyone got out safely.

The last part of the FFA Creed reads:

I believe that American agriculture can and will hold true to the best traditions of our national life and that I can exert an influence in my home and community which will stand solid for my part in that inspiring task.

I believe that these students have definitely influenced the community and will continue to inspire all.

KELO News interviewed the students and following is a link to the story:  https://www.keloland.com/news/local-news/beresford-ffa-students-praised-for-their-actions-during-fire/1597367328