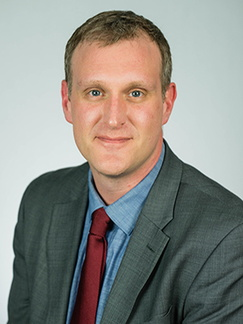 Dr. Peter Larsen is 1997 graduate of Beresford High School.  He earned his Bachelor of Science in Biology from South Dakota State University in Brookings, SD and his Masters of Science (Biology) and PhD (Zoology) degrees from Texas Tech University in Lubbock, TX.

Dr. Larsen was a postdoctoral researcher and senior research scientist at Duke University for six years (2012-2018) and he is now an Assistant Professor in the Department of Veterinary and Biomedical Sciences at the University of Minnesota.  His areas of research expertise are diverse and include molecular biology, genomics, bioinformatics, and pathogen discovery.  Peter leads a research laboratory at the University of Minnesota and the lab focuses on the development of novel molecular diagnostic tools, identification of emerging zoonotic diseases, and origin of neurodegenerative diseases including Alzheimer's Disease.

Dr. Larsen has published 50 manuscripts in peer-reviewed journals as well as three book chapters.  His work at Duke University on Alzheimer's Disease resulted in the filing of a patent in 2017 and a private donation of $350,000 to support his work.  Peter's research program is international, and he has led and participated in expeditions to Borneo, the Caribbean, Ecuador, Iraq, Kyrgyzstan, Madagascar, and Mexico.  Many of these expeditions focused on species discovery and pathogen surveillance in small mammals and, to date, Dr. Larsen has described a new species of bat and identified multiple novel pathogens circulating in the lemurs of Madagascar.  In 2011, Peter served as a contractor for the United States Department of State and he travelled to Baghdad, Iraq to establish connections with Iraqi scientists involved with Iraq's historical nuclear energy program.  His research has been highlighted by National Geographic, Vox News, STAT News, and Minnesota Public Radio.  His latest work at the University of Minnesota has resulted in over $2,000,000 in grant funding to support his research lab.  Peter has served as a mentor for over 20 undergraduate and graduate students throughout his career.

Dr. Larsen has received several awards including the Duke University Postdoctoral Award for Professional Development and the highest student honor from the American Society of Mammalogists, the prestigious ASM Fellowship of Mammalogy.

Peter met his wife, Roxy, in the Caribbean during a research expedition and their first meal together was a can of Spam shared on the side of a volcano on the island of Saint Vincent.  Roxy is originally from Arlington, South Dakota and she also earned a PhD in Biology at Texas Tech University.  Roxy is an anatomist who taught as an Assistant Professor at the Duke University Medical School and she is now an Assistant Professor at the University of Minnesota, specializing in veterinary anatomy and education.